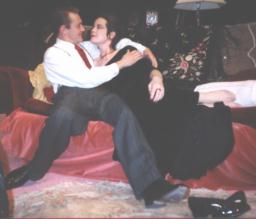 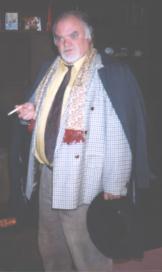 As a direct response to audiences' approval of THE EUROPA HOTEL as a venue, this year CENTRE STAGE, with the generous support of the EUROPA presented John Van Druten's 'BELL BOOK AND CANDLE' an elegant comedy of 'bewitchment' which opened, suitably late night, on Friday 13th (!) November in the EDINBURGH SUITE and ran until Sun 22 Nov.

'BELL BOOK AND CANDLE'- like 'SUITE IN TWO KEYS' and 'LAST OF THE RED HOT LOVERS' - is funny, sophisticated, and stylish The very sort of piece that an audience would expect to see in the Europa.

John Van Druten had a long career as a playwright from the 1920's through to the 1950's and amongst his hits were, most famously, 'I AM A CAMERA', based on Christopher Isherwood's stories of Berlin (and subsequently adapted for the musical 'CABARET'), and 'BELL BOOK AND CANDLE' which was filmed with James Stewart, Kim Novak and Jack Lemmon. It is a sparkling comedy of love, misunderstanding and - witchcraft!

In true 'out of town' opening tradition, the play opened as part of the summer season at THE RIVERSIDE THEATRE, Coleraine, in July. 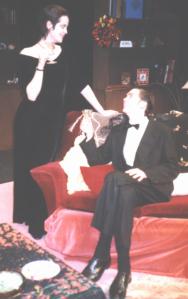 Terrific production of a witty comedy

...John Van Druten's wise and witty comedy took flight from the moment the curtain rose and didn't touch down for two and a quarter hours ... the cracking pace of the production and the charm and bite of the actors give us the kind of evening in the theatre that comes along all too rarely...

And the Belfast Telegraph was equally enthusiastic: 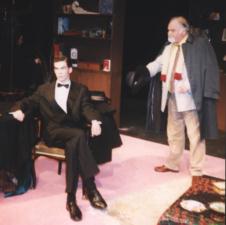 The chink of ice in a glass, Frank Sinatra crooning in the back- ground; a sumptuous sitting room in front of us - it's time to sit back and enjoy Centre Stage's Festival show.

This is the third year the company has performed in the penthouse suite of the Europa, always choosing plays that perfectly suit the surroundings - civilised, sophisticated dramas from another era, with plenty of smart clothes and smarter remarks.

Gillian is, of course, a witch. So is her brother Nicky (a well-cast Marty Rea) and her flamboyant Aunt Queenie (Roma Tomelty, utterly at ease with her reincarnation as a native New Yorker).

Gordon Fulton adds another ingredient to this witch's brew as author Sidney Reditch, who aims to expose the foul deeds of the witches and warlocks who, he claims, are all around us.

Here's hoping next year's show is just as bewitching.

The cast of BELL BOOK AND CANDLE included LAINE MEGAW - who can be seen in a major role in the film DIVORCING JACK, JIM DURAN who is well known to television audiences in a variety of roles, GORDON FULTON who delighted audiences last year with his portrayal of the hapless Barney in the Festival production in the Europa of Neil Simon's LAST OF THE RED HOT LOVERS and the recent tour revival of the play, talented young newcomer MARTY REA, and ROMA TOMELTY who achieved a stunning success during last year's Edinburgh Festival with her portayal of George Sand in her own play A SUBLIME DISCORD