A COUPLE FOR KIPLING 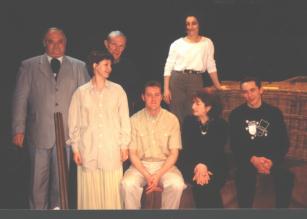 Back Row: (l - r) Gordon Fulton (Kipling) Harry Barton (Author) Mary Moulds (Stage Manager)
Front Row: Julie Kinsella (Melissa) Jim Duran (Strickland) Dolores McNally (ASM) Andrew Porter (Technicial ASM)
A tender love story and a writer who is frequently dismissed as an imperialistic jingoist might seem an unlikely juxtaposition; yet, in A Couple for Kipling, Harry Barton has created an enthralling play where the two characters, Melissa and Strickland, in love and with a Gulf war looming, discover their true feelings for each other as they prepare a show - the extraordinary range of subjects in Kipling's writing is revealed in the material they must prepare, and through the insights they gain from his work comes understaing of how each feels about war, love and the call of duty - in whatever form that might take

This stylish, sometimes tender, sometimes witty new play provided an both an opportunity to enjoy Harry Barton's ready way with words and to rediscover the joys of an acquaintance with the amazing versatility, range and quality of Ruyard Kipling's work

Gordon Fulton, fresh from his triumph as Sidney Redlitch in our production of Bell Book and Candle in the Belfast Festival at Queens, plays Rudyard Kipling.
Julie and Jim sing "IF..."
Gordon Fulton and Julie Kinsella

Jim Duran who delighted everyone with his suave portrayal of Shep Henderson in the same production plays Strickland, and Julie Kinsella who was a gloriously eccentric Flower Witch in the company's Christmas production of The Snow Queen is Melissa in this exciting new and first production of the play
Julie Kinsella and Jim Duran as Privates Mulvaney and Otheris
Harry Barton

Harry Barton has been writing plays for stage and radio for many years, and in addition has several books to his name - his 'Mr Mooney' character was a strong satirical voice in Ireland in recent decades, and his plays for radio have included a BBC Giles Cooper award for Best Play and a nomination by RTE for the Prix Italia. He has also written a play and book for the National Trust on the Earl Bishop of Derry.