THE BELFAST FESTIVAL AT QUEENS

"Sparkling" — "Witty" — "Elegant" — "Stylish" — "Funny" — "Sophisticated" — these are the words that are immediately associated with Noël Coward - The Master - and in this year the 100th anniversary of Coward's birth CENTRE STAGE was proud to be the first professional company in Northern Ireland to mount a production of a Noël Coward play.

In association with The EUROPA HOTEL the company performed in its usual spot at the top of the hotel in The Edinburgh Suite during the period of The Belfast Festival at Queens. Appropriately, as the first of these Centre Stage productions in the Edinburgh Suite was Coward's Suite in Three Keys, Centre Stage returned to the brilliance of The Master's work with this production of Fallen Angels. FALLEN ANGELS is one of Coward's early plays, showing both his "talent to amuse" and a talent to provoke strong reactions, even to shock contemporary audiences; it provides a wonderful comedy tour-de-force opportunity, particularly for the women in the play.

Ah, the sophistication of Noel Coward - he's hard to beat... Coward's ascerbic wit is much in evidence in this delightful drawing room comedy, with its cocktails, champagne and endless cigarettes.
...Ms Tomelty breezes through the evening, with Ms Bereen in hot pursuit... when Patrick Duncan's suave Maurice finally appears - well... you'll have to see it, to find out what happens next!

And the BBC Radio Ulster review said "...Full marks - ten out of ten!"

Roma Tomelty, who's natural style is that of the sophisticated women who grace the pages of the Master's work, was one of the two scheming spouses whose past indiscretions may well cause trouble - in this she was ably abetted by the elegance and flair of Helena Bereen. 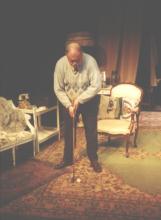 Gordon Fulton, who delighted audiences with his portrayal of the hapless Barney in Neil Simon's Last of the Red Hot Lovers during the Festival two years ago and in a recently toured revival of the play, and was the bucolic Sidney Redlitch in Bell Book and Candle last year, was one of two bemused husbands who provide the unwitting foils to their wives plans for a romantic reunion with a darkly Gallic past lover;    Gordon Fulton

J J Murphy whose years of experience in the comedies performed during the great days of the Arts Theatre are an asset to any production was the other; the cast was completed by Mary Moulds as a much put-upon maid and Patrick Duncan who brought his suave flair to the production.

The play was directed by Colin Carnegie.

Following the success of last year's production of 'BELL BOOK and CANDLE', Centre Stage and The Europa Hotel once again combined forces to bring the most sophisticated and witty in theatrical entertainment to The Edinburgh Suite at the top of the hotel.

The play opened at The Riverside Theatre Coleraine at the end of August for a short Summer season, and was a great success with the audiences.

Centre Stage brought Roma Tomelty and Helena Bereen together in a knock-out combination to close the Riverside's Summer season with a flourish this last bank holiday weekend. Fallen Angels‘, Noel Coward's 1925 snappy wry comedy of the collision of real life‘ with conventional attitudes, was given full loving treatment and proved to be a resounding success...
The skill of Coward is that he makes the wait both interesting and amusing; the skill of the leading ladies was that they both did this and kept the dialogue flowing... It would be difficult to imagine this better done
In the final act... get a real chance... and they seized it with both hands, as Patrick Duncan seized his as the incredibly smooth Maurice ...Mary Moulds' playing of Saunders, the Maid... Her studied impassivity bordering on insolence... showed how to convey character with economy of means.